GMBand on This Morning Show, The Non-Surgical Weight Loss Experts 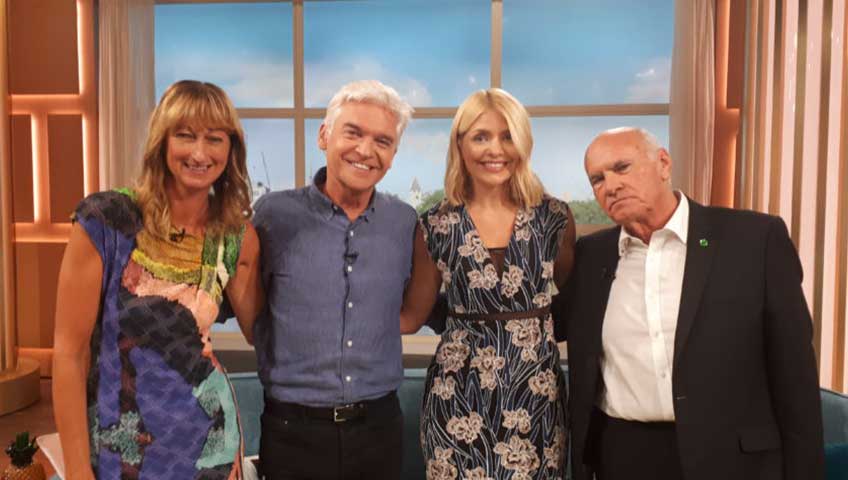 Elite Clinics in Spain is delighted to announce that their Gastric Mind Band therapy will be featured on This Morning on Wednesday. (July 4th)

Martin and Marion Shirran will be sitting down with Philip and Holly in the ITV This Morning studio in London, to discuss the benefits of gastric band via hypnosis – and how it could save the NHS £125million a year.

As the NHS turns 70 on Thursday, July 5th, there has never been a better time to evaluate it and see how it could look at 100.

Martin and Marion Shirran moved to Spain and established Elite Clinics in 2004. They created Gastric Mind Band therapy in 2007 after a client they were treating to help stop smoking, joked that she would love them to also hypnotise her into believing she had a gastric band fitted.

Martin lost 6 stone after his wife Marion hypnotised him into believing he had a gastric band fitted. He was the first guinea pig for the Gastric Mind Band method. He has now kept the weight off for 10 years and is now a Cognitive Behavioural Therapist, helping people re-programme their relationship with food. He believes passionately that the growing obesity and type 2 diabetes crisis can be solved – simply using the power of the mind.

Since it began, more than 1,000 people have come to their clinic in Spain from around the world and Martin and Marion have refined the technique over thousands of hours of one-to-one clinical therapy. Clients stories have featured in national newspapers, TV and magazines. The Gastric Mind Band therapy is a three-day programme of clinically evidenced cognitive behavioural therapy (CBT) and neuro-linguistic programming which culminates in a final gastric band ‘surgery’ via hypnosis.

People get to take control of their weight and health for the long-term. They feel empowered to know that no food is off limits. A very different experience to physical gastric band surgery where for the first six weeks post-op people have to live on soft foods like yogurt, soup and mashed potato.

Clinical evidence for their Gastric Mind Band non surgical weight loss was first presented at Coimbra University in Portugal in 2012 at the invitation of Professor Philip Zimbardo of Stanford University, USA. Dr Sarah Clarke presented further clinical evidence at the 2nd International Time Perspective Psychology conference at Warsaw University, Poland, in 2014. You can read a summary of this here.

Pause Button Therapy, where clients can ‘freeze’ time – allowing them to a breathing space to consider their actions and possible consequences – is supported by Windy Dryden, Professor of Psychotherapeutic Studies Goldsmiths University of London and Dr Theano V. Kalavana, Assistant Professor of Health Psychology and Clinical Communication at the University of Nicosia Medical School, amongst others. Click here to read more.

You can read about Martin and Marion’s story and qualifications here, and read dozens of stories from clients who have not only lost weight but kept it off for good here.

If you would like to find out more about Elite Clinics in Spain and Gastric Mind Band, why not email Martin and Marion via mail@gmband.com or call them on Skype via (0034) 951 311 591. Or visit the FAQ section to find out more here.