Home » Do I Qualify for a Gastric Band on the NHS?

Am I eligible or do I qualify for an NHS Gastric Band, is one of the most frequently posed questions according to Internet search engine statistics. If you are overweight and have struggled to lose weight simply by dieting, then you are possibly asking yourself the same question.

So, how can you find out? Well, you could go to the NHS website, but to make it easier for you, the NHS criteria for a gastric band are listed here below, so you can answer your question straight away.

The NHS criteria for a gastric band can be quite strict, and sometimes overweight people have resorted to deliberately gaining weight in a desperate attempt to get their BMI high enough to qualify for the surgery.

If you can afford it, you have the option to have private gastric band surgery. It is easier to meet the lower criteria required by private surgeons, and there is no need to be referred by your GP.

If you are seriously thinking about whether you are eligible for a gastric band to help you lose weight, then you need to be aware that this is a life-changing, risky and invasive procedure, which can lead to complications and also cause some quite unpleasant gastric band side-effects.

NHS Criteria For A Gastric Band

Weight loss surgery is available on the NHS for people who meet certain criteria, although the criteria can vary across England.

National Institute for Health and Care Excellence (NICE) guidelines on obesity recommend that surgery should be provided on the NHS if you meet all of the following criteria:

If your BMI is 50 or over, surgery may be considered without needing to try other weight loss methods first.

If you’ve been diagnosed with type 2 diabetes recently, particularly if you have a South Asian background, an assessment to see if surgery is suitable may be considered if your BMI is below 35. The information above is taken from the NHS website.

We provide a procedure that is NON-SURGICAL and alot cheaper than a gastric band.

Of course, going under the knife in order to lose weight isn’t the only option. There are numerous weight loss methods available now, using very clever evidence-based, psychological approaches, based around the new findings related to Neuo Plasticity to help overweight people overcome their eating issues Permanently and re-think their whole relationship with food.

Gastric Mind Band Therapy helps people set off on a new path as they start on their weight loss journey. It has a similar success rate to gastric band surgery, but is completely non-invasive, doesn’t involve any risk, or nasty side-effects, and the eligibility criteria are much more relaxed too! Plus it is a fraction of the cost.

Regardless of whether your current BMI does or doesn’t fit into the NHS guidelines for eligibility, then we would advise you to at least find out more about the Gastric Mind Band, surgery-free, weight loss programme. Ask yourself, just why have over a thousand people flown around the world to visit a British run clinic based in Malaga Spain, it never advertises as virtually every new client is a referral from a past satisfied individual.

Gastric Band Cost with the NHS

The most common type of bariatric surgery performed in the NHS is actually the Gastric Bypass, rather than Gastric Band Surgery. Gastric Bypass has fewer ongoing costs involved compared with the Gastric Band, so this procedure is less of a drain on NHS resources, do be aware that it is completely non reversible.

Gastric Band patients require regular follow up appointments for adjustments to the band, which costs the NHS more in both time and money.

If you are thinking about going down the private route for gastric band surgery, then the average cost can often be around £6,000, depending on where you choose to have it done. Sometimes people opt for having a gastric band abroad, as many countries offer the surgery for less cost than in the UK. Our clinic is based in Malaga.

In comparison, the Gastric Mind Band therapy is available from just £1,695, with zero risks and matching results.

It is strongly advisable to consider all the possible pros and cons before deciding whether NHS Gastric Band Surgery is the right option. The pros and cons are clearly laid out on the BUPA website:

How Long Does It Take To Get A Gastric Band?

Funding for weight loss surgery varies county to county and only a certain amount of money is set aside each year. The amount of people currently on the waiting list and the amount of money available for treatment determines how long a patient will be on the waiting list for gastric band surgery. Once you are recommended for surgery, treatment is decided on a case by case basis, so if someone who is in desperate need for the procedure joins the list they may go straight to the top. The amount of time a patient is on the NHS waiting list can vary from anywhere between 3 months to 4 years, and during this time many patients have decided to opt for private surgery due to the long wait times. The gastric band operation usually costs around £7000 if done privately and in the United Kingdom. 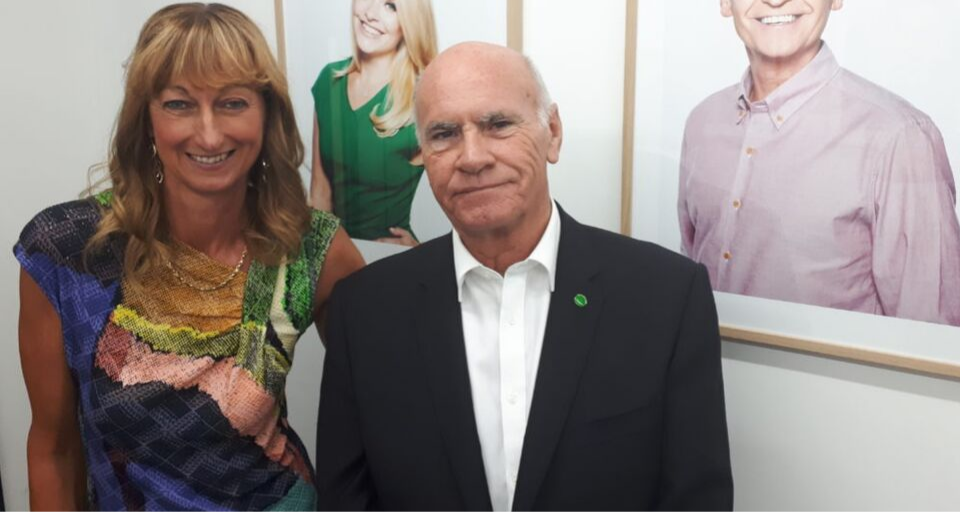 With the Gastric Mind Band procedure there is of course no surgery, no risk of MRSA, no general anaesthetic, no hospitalisation, no restricted foods, no extended waiting periods, and, of course, it comes at a fraction of the cost. Rather than simply asking yourself “Am I eligible do I qualify for NHS gastric band?”,you owe it to yourself to check out the success stories of the hundreds of people from around the world who have visited the Elite Clinic for the Gastric Mind Band Permanent Weight Loss Treatment.

The developers, and trademark owners of the Gastric Mind Band, Martin and Marion Shirran, have now built up more than eight thousand one to one clinical hours, over the past ten years, working with people who fly to the clinic from around the world, each determined to achieve their ideal body weight. At the end of the GMB treatment each client leaves the clinic with his or her own set of carefully prepared tools, most are completely unique to the GMB treatment including a very extensive manual for life, and a set of studio produced, digital recordings of each of the sessions. And don’t ever forget there can be no fear of a return to the old yo-yo dieting scenario; this is a permanent solution.

At the Gastric Mind Band clinic we are totally committed to client follow-up, and on-going research and development. We are proud that we offer the most thorough answer to those wanting a lifelong solution to their weight problems; in fact it is now often referred to as the Gold Standard in Permanent Weight Loss.

If you are still in any doubt, why not read the independent reports and reviews on the Press page.

Martin and Marion have been featured in just about every newspaper and magazine in the UK. They also travelled to the United States to be interviewed on the two largest US TV news channels. Their Gastric Mind Band treatment has now become something of a phenomenon on both sides of the Atlantic, developing into the treatment of choice by members of the public, and celebrities alike. The procedure they developed has since gone on to be the subject of the book, The Gastric Mind Band, published by Hay House.

How do I Qualify for a Gastric Band on the NHS?

Gastric band weight loss surgery is available on the NHS for people who meet a certain criteria, including having a BMI of 40 or more, or having a BMI between 35 to 40 with health condition such as high blood pressure or Type 2 Diabetes. If you’ve tried all other weight loss methods and are struggling to lose the weight of keep it off, you may also be an ideal candidate for the surgical gastric band. Prior to qualifying, you will be examined to ensure you are healthy enough to be put under general anaesthetic and operated on, the risks associated with a general anaesthetic increase substantially when someone is overweight. The gastric band criteria however can vary across England so it’s important to check before applying. Waiting lists vary across the UK, from 3 to 48 months.

The Surgical Gastric Band Treatment provided by the NHS costs between £5,000 – £7,000, but if you are thinking of going down the private route you can expect to pay up to £9,000 for Gastric Band Surgery.

Is there a Weight Limit for Gastric Bands?

Gastric band surgery is designed for those with a BMI over 40 or for those between 35 and 39.9 suffering with obesity related health conditions such as Type 2 Diabetes, sleep apnea and high blood pressure. If you have any symptoms of the below, you could be a candidate for a gastric band:,

You may not be able to have a Gastric Band however if you have certain long-term health problems, such as bowel disease or heart disease.

The amount of time any patient can be on the NHS waiting list for can very between 3 months up to 4 years – operations are decided on a case by case basis so you may get moved down the list if someone who desperately needs the procedure signs on.

Is a Gastric Band the Safest Way to Lose Weight?

Gastric Band surgery can lead to significant weight loss and help to improve many obesity related conditions, but it’s a major operation which should only be considered as a last resort and after being unable to lose weight through healthy eating and exercising. The results are not always permanent.

Going under the knife and having gastric band surgery isn’t the only option out there to help you lose weight. There are various other ways to lose weight, including gastric band hypnotherapy delivered in Spain by GMBand now regarded as the Gold Standard in Non-Surgical Weight Loss.

At the Elite Clinic we use effective Clinical Weight Loss Hypnotherapy treatments combined and underpinned with the latest Cognitive Behaviour Therapy that are non-invasive and non-surgical to ensure you completely transform your relationship with food and ensuring you maintain the weight loss in a healthy way. It’s our main goal to help, guide and inspire our clients to reach their desired weight and size in a healthy and surgical-free way.

Are the Non-Surgical Gastric Bands Safe?

There is no surgery, no general anaesthetic, no hospitalisation, no restricted food, no extended waiting period and of course the fact that it comes at a fraction of the cost of a gastric band is a bonus!

Each standard gastric mind band appointment is completed over three days at our clinic in Spain. The appointments will consist of four sessions, incorporating a range of Clinical Weight Loss Hypnosis therapy treatments including Cognitive Behaviour Therapy, Hypnotherapy and Neuroplasticity, which will result in a highly successful and permanent weight loss for years to come.