Hazel is a certified clinical hypnotherapist and bariatric hypnotherapist. Hazel travelled to Spain in September 2009, and was the first person to be trained by Martin & Marion Shirran and subsequently accredited to provide the GMB Experience in the United States of America, Gastric Mind Band USA.

Shortly afterwards Martin & Marion made their first trip to the USA and worked with Hazel and a small group of USA based interested therapists.

In 2010 Martin & Marion were invited to visit New York to appear on the Good Morning America TV show. Hazel kindly agreed to meet them and was also invited onto the show.

One of Hazel’s first clients was Marianne Vega, who, following her GMB treatment in the US went on to lose 115 pounds. Marianne joined Martin, Marion and Hazel on the show. You can see the interview by visiting the Press section of this site. 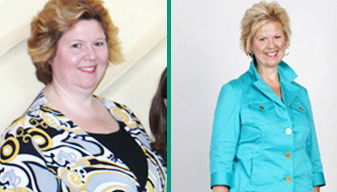 She says of her Gastric Mind Band experience: I gave therapist Hazel Newsom a call and, even though I had a lot going on in my life, we scheduled the treatment. In November 2009 I went through the hypnosis stages with Hazel. On Saturday November 7 I had the hypnosis “surgery.” I wasn’t sure at the time that it was working. I wasn’t even sure if Hazel had managed to hypnotize me, but she assured me that whatever she was saying was going into my subconscious.

The results were amazing. Before the therapy, I would wake up thinking about what I would eat. Now, I have to remind myself to eat. Before I would eat four or five desserts at one time. My stomach has shrunk, so I don’t eat as much. It is so empowering to know that I can control my portions. Now I don’t ever think about dessert. I eat very healthily: chicken, fish, fresh vegetables and salads. I used to live on soda and ice tea; now I only drink water.

It was my birthday a few weeks ago so I decided to have a slice of birthday cake but after eating a bite or two, I pushed it away. In the past I would have cut one slice, then another until I had eaten the whole thing.

That has been the most freeing thing: I don’t have to worry whether I will eat something, because I know that I won’t. I can’t ever remember weighing less than 200 pounds as an adult, so that’s the goal weight that Hazel and I set for me to achieve in one year. When I weighed myself on August 7, 2010, I weighed 210 pounds. I had lost 115 pounds in ten months! I will reach my goal weight by December, but I think I’ll probably go lower because I feel that I can.

I’m just so proud of myself and if my experience can help one person not go through surgery, I’ll be happy. The thing that amazes me most about the Gastric Mind Band™ method is how easy it is to do. Your mind programs you to eat the right things. I really feel I have a new life now. Contact Martin and Marion by email.