Sarah’s weight had been an issue for as long as she can remember – “I’d always been a bit chubby as a child, but my weight ballooned when I was prescribed steroid-based medication for asthma at the age of 9.” She was 13 stone by the time she was 11 years old, and weighed 19 stone at the age of 19. Her older sister Amanda has always been slim. Sarah says: “I spent my teenage years envying her. I wanted her hair, her style, and, most of all, her figure.”

In the year 2000, Sarah and Amanda decided to have a joint wedding. “At a size 24, I must have been crazy to agree to a double wedding with my size 8 sister, but at the time I thought it was a great idea. I can still remember the pang I felt when I saw Amanda try on her understated white gown. She looked beautiful, whereas I’d been forced to have my dress custom made to fit my ever-expanding waistline. Our wedding should have been the most incredible day of my life. Instead I spent it feeling awkward and uncomfortable.” 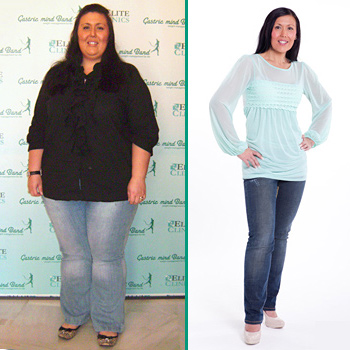 Sarah lost half her body weight after having the Gastric Mind Band Therapy. Her story, “I Lost Whopping 144lbs”, has been told around the world…

“Still, as unhappy as I was, as the years passed, I always found an excuse not to lose weight, being busy with my job as a travel agent, then using my two pregnancies as an excuse to eat. There was only a year between Harrison and Marshall, so I didn’t have chance to lose all the baby weight before I had the next one. I’d tried a few diets, but with no success, until I eventually gave up altogether, surviving on Mars Bars, pasta, fizzy drinks, double portions of take-aways and curries. By the time I was 27, I had reached my heaviest weight of 21 stone, and even my size 28 trousers were a tight fit.”

In 2009, Sarah and Lee moved to France with their two boys and when they decided to fly back home for a New Year’s Eve party, Sarah suffered the classic indignity of being unable to do up her seat belt. She went to the party dressed as an angel, but said she felt absolutely disgusting. “I looked awful – it was just like a big white tent. I looked at those pictures and thought: I’ve got to sort myself out.”

On 1st January 2010, Sarah made a New Year’s Resolution, and no-one but she knew how determined she was to see it through. “I didn’t want to be a fat mum. I didn’t want to die young and leave my kids without a mother, all because I had eaten my way to an early grave.”

“I’d seen an article about a girl who’d lost lots of weight with the Gastric Mind Band, and I thought it was the answer to all my prayers. I couldn’t afford to pay for a gastric band, and anyway, it’s a big step. I thought if I could just reprogramme how I think…..” 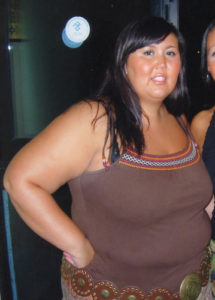 When Sarah visited the Elite Clinic in Spain in March 2010 she weighed in excess of 20 stone. Her BMI was 46.7 and she was rated as morbidly obese. She went on and lost whopping 144lbs. You can read a story from the Daily Mail following her treatment here.

Sarah had high blood pressure and was on medication for asthma, she was constantly tired and sometimes struggled just to walk. She just about managed to squeeze herself into size 24 clothes.

Previously she had tried just about every diet that existed including trying Diet Pills and also joined a number of the so called slimming clubs, she did sometimes manage to lose a little weight when following the other diets, but then put it all back on again. She had spent many hours reading about Gastric Band Surgery and the problems, she even joined a few forums on the subject, after reading about the many side effects of the surgical alternative she decided it was not for her. 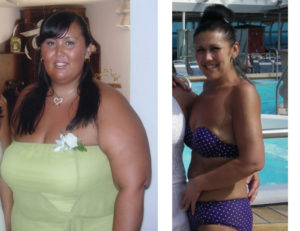 “I was surprised how much therapy was involved with GMB – talking about my relationship with food and opening up about it. I didn’t realise some of the issues I had, until I talked about it, for example, how greedy I was. It totally changed my mindset and literally reprogrammed my relationship with food. When I was asked if I ate in secret I had to admit, Yes, all the time. I eat a block of cheese while cooking, but I don’t count it. I’ll eat five chocolate bars, but I tell myself I only had one. I live a lie.”

My overeating was driven by psychological factors that needed addressing. I was stuck in a cycle of feeling unhappy because I was fat and eating to fill the void. It was a vicious cycle. I had to learn to be honest with myself, kind to myself and eat food that was good for me.”

“I knew I wasn’t going on a fad diet – I was going to change my lifestyle. Not just to be a better mum, but to finally, truly like myself as a person. As I walked out of my last session, I felt so empowered. I knew something inside me had changed for good. I was very focussed – I started losing weight immediately. I wanted it to work and that’s why I was so successful. I don’t feel like I’m on a diet. I can eat whatever I choose – it’s just making the right choices. I choose to cut out carbs as much as possible, as they were my biggest downfall in the past. I know I’ll feel ten times worse if I eat things like bread and pasta now, so there’s no point. I’d rather choose to eat something healthy and enjoy it!”

Sarah said “the GMB treatment was different from the start, I never saw it as a diet, I returned home after having the treatment with a totally different relationship with food, I just ate when I was hungry and not for all the other reasons that I had in the past, the Gastric mind Band also ensured that I automatically felt full on much smaller portions.” I also started eating so much slower following the CBT session, I remember Martin telling me that ‘Thin Women Eat Slowly’, I never forgot it. Additional information about Sarah appears in the Weight Loss For Brides section of this site.

After completing the Gastric Mind Band Treatment Sarah’s weight has dropped to 9 stone 12lbs. A weight loss of 144 lbs. Her BMI is 23.8, a level which is rated as healthy and normal, her blood pressure also reduced to a normal level, and the asthma is virtually nonexistent. Sarah has a passion for running now and she has completed several half marathons.

Sarah’s initial goal was to get down to 14½ stone;she could not contemplate ever being under the 14 stone mark, as she had been over 15 stone all through her teenage years. However, after the GMB treatment, when she did get down to her goal weight of 14 stone, she was finding her new way of eating and her positive relationship with food so easy and natural that she carried on, and now loves jumping on the scales and seeing the 9 stone mark! It has exceeded all her dreams, and opened up a whole new life. I Lost Whopping 144lb!

Sarah gradually became more outgoing and enjoyed being more active too, as her weight reduced further. She realised that she and Lee were growing apart, as he continued enjoying the former lifestyle they used to follow together, and they finally split up. 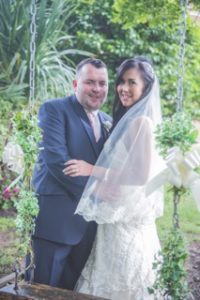 Sarah met Adam in 2012. He was very proud of her impressive weight loss achievement and they soon fell in love. They got married in July 2015, and Sarah walked down the aisle for the second time, absolutely radiant, in her dream size 10, classic white gown, with a delicate lace veil.

“When I slipped into the dress and saw my reflection, I burst into tears. I never knew I could look so elegant. Walking down the aisle for the second time, I felt as happy as I looked. Holding my two wedding photos side by side, even I’m sometimes shocked by how different they look.”

Following her treatment Sarah has been featured on TV shows in both the UK and Australia, all interested in the same thing “Lost whopping 144lbs” Sarah’s story has been told in the Daily Mail and Daily Express Newspapers and in a number of national magazines. You can read a number of articles about Sarah’s weight loss journey in the press section.