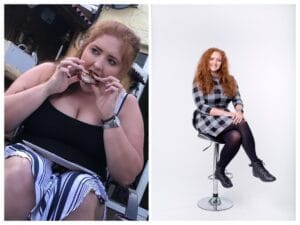 An obese Ruby Moseley told how she lost a third of her body weight after completing her Gastric Mind Band Treatment at the Elite Clinic.

Ruby Moseley, 25, of Welling, Kent, was bullied for being ‘ginger’ and overweight as a schoolgirl and ballooned to 17st while working long shifts in pubs, restaurants and cafes.

Having left school aged 19, weighing around 15st, Ruby worked in restaurants and bars until moving back to the UK from Spain almost two years ago. Working all hours to afford her rent, she missed regular meals and spiralled into a cycle of comfort eating: ‘Essentially I was over-eating when I was stressed, tired and depressed.

Working in a coffee shop in the day and covering late-night shifts in a pub, Ruby found herself giving into the temptation of free muffins, pastries and calorie-laden Frappuccino’s by day, and takeaway fried chicken and pizzas by the time she finished work.

‘On the rare occasion I had a night off, my boyfriend and I would order pizza, but over time the orders got bigger. We started sharing a large pizza, then got a medium one each and started adding sides. Sometimes we’d share a tub of ice-cream after as well,’ Ruby admitted.

By Christmas 2018, when she tipped the scales at 17st, she realised something had to be done.

‘I’d noticed from seeing pictures of myself that the weight was piling on, but seeing just how much I really weighed on the scales made me realise I had to do something about it,’ she explained.

‘It was the heaviest I’d ever been, I was wearing size 20 clothes and I felt disgusted with myself.’

Ruby signed up for Slimming World classes and joined a female only gym, determined to make 2018 the year she lost weight to make her feel happier.

She recalled: ‘I lost about a stone the first month and I felt better to be making progress.

‘My boyfriend Ben was really supportive; he liked me the way I was but knew how unhappy I was with my body.

‘I quit Slimming World after a couple of months because I wasn’t losing any more weight after that. I felt stuck but not ready to give up trying to be slimmer. I still weighed myself regularly and did a combination of Slimming World and calorie counting.’

But the happy couple were separated when the first lockdown came, with Ben staying at his family’s home. Alone and unable to go to work, Ruby put on 10lbs sitting on the sofa snacking and drinking, so decided to use her dual Spanish residency to stay with her family in La Cala de Mijas in Spain.

It was a life-changing trip; Ruby met up with an old school friend who had been a similar weight to her, but was now barely recognisable.

The friend told her she’d had gastric sleeve surgery – where part of the stomach is removed to make it smaller – at a cost of £10,000.

‘I was completely shocked, she looked amazing and I was jealous,’ Ruby admitted. ‘My Nan had been urging me since I was a teenager to try to eat healthily and do exercise to lose weight, and when I went home, I told her about it.

‘She told me she’d had two friends who had been on UK TV recently after having gastric “mind” bands for a fraction of the cost of the invasive surgery my friend had. I was sceptical but willing to try anything.’

Uncomfortable with the idea of going under the knife, Ruby did some research and booked herself in for an alternative treatment featuring cognitive behaviour therapy-based Gastric Mind Band Treatment at the Elite Clinic in Fuengirola, Spain, with her grandmother Marion picking up the £2,500 bill.

After four daily, very intensive CBT sessions, some five hours plus at the clinic, she finished each day with a session of Clinical Hypnosis.

‘During the very intensive first session, they took me through an in-depth questionnaire covering my childhood, my background, my past relationship with food and just about every aspect of my life, to see what my triggers were.’

‘Each day I had deeper introductions to their own version of CBT ‘Pause Button Therapy’ that therapy was to help me change my habits around food.

We looked at why I would quit a diet and how to change my complete thinking around food.

‘Day four was the final and deep hypnosis session, where they talk patients through their own “virtual” gastric band “surgery”. It was an amazing experience.

‘At the clinic they had all kinds of surgical models to explain aspects of the surgical gastric band procedure and I was shown a film of an actual operation. They connected me to a type of heart monitoring machine before I was hypnotised.

‘While I was under, I remember thinking I was wearing a medical gown. I felt myself being wheeled into an operating theatre, and could vividly hear the sounds of the medical instruments being picked up and put down.

‘I could also the sound of people moving around. The smell in the room changed: it was exactly like I was in hospital.

‘As the surgeons “started the procedure”, Marion, my therapist, placed a golf ball into my hand and I was told to squeeze it. As I did, I felt the band tighten around my stomach. It was really surreal.’

Ruby’s relationship with food completely changed that day, and she is now 13st and a curvy size 12, with a target weight of 11st.

Since losing 4st, Ruby says her 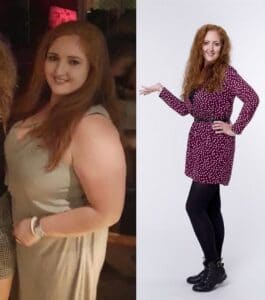 self-esteem has improved and she’s much happier in herself – and she has three large bags of clothes to get rid of because she now wears a size 12.

She added: ‘I keep a golf ball in my handbag to remind me not to eat too much and listen again to the hypnosis sessions whenever I feel like it.’

She added: ‘It’s to make you think before you eat something, to picture a fork in the road and what will happen if you eat it.

‘It might be enjoyable eating the doughnut, but you fast-forward in your mind and you feel horrible. Fast-forward again and you’re not losing weight and you’re stuck in a cycle.

‘You hit rewind and you think what happens if you don’t eat the doughnut.

‘Fast-forward two hours and you feel good about yourself because you made the right choice, you fast-forward to where you see yourself losing weight. It’s like painting a mental image in your head.’

Ruby said: ‘The clinic changed my eating habits by changing my mind-set and teaching me tools to help, like holding my knife and fork in the opposite hands to help me eat more slowly and not eating in front of the TV so I can pay proper attention to what I’m eating.’

She said: ‘I feel a lot better in myself and Ben loves the confidence losing weight has given me. He loves me anyway, but he’s seen the change in me and how much happier I am.

‘I saw my Nan in November and her face was a picture, she told me she was really proud of me.’

Elite Clinic owner Martin Shirran said: ‘The results achieved by Ruby are incredible; we are so very pleased for her, especially as we were forced to do all the follow-up sessions via Skype and Zoom.

‘Since the situation with Covid we have been working around the clock to perfect and improve our on-line treatment package.’